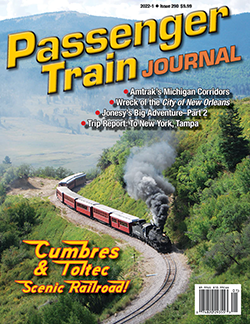 1st QUARTER 2022: In this issue, we take a ride on the Cumbres & Toltec Scenic Railroad as they celebrated their 50th anniversary in 2022. Kevin McKinney explores Michigan’s passenger corridors, while Robert Schmidt examines the 1971 wreck of the City of New Orleans. All this and more in the 2022-1 issue of Passenger Train Journal!

by Mike Schafer — This railroad has a long history in terms of passenger trains serving metro St. Louis and welcomes “rare mileage” collectors.

The Michigan Corridors and Beyond–Part 1

The Wreck of the City of New Orleans

by Robert P. Schmidt — Amtrak was less than two months old when the newborn carrier experienced its first major wreck. For want of a simple nail, ten lives were lost.

by Mark Jones — In this second installment of Mark Jones’ career with Amtrak, readers will join him on some of his early runs as a dining-car waiter and car attendant.

by Kevin McKinney — PTJ’s founder travels to Washington and New York as well as to Tampa starting on Amtrak’s 50th birthday.

On The Point/Editorial by Mike Schafer

The Journal/Compiled by Kevin McKinney

Window on the World/Kevin McKinney