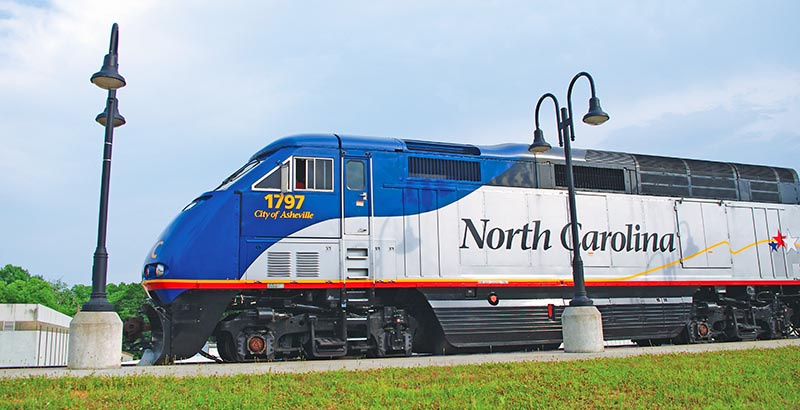 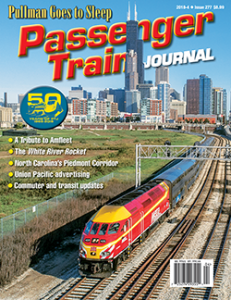 It may not be as well-known as rail programs in California, Washington, Illinois, or Michigan, but North Carolina’s approach to rail is one of the most innovative and unique in the country. Perhaps it is because it started quietly and grew slowly and steadily, largely unnoticed even by many rail advocates elsewhere. What the Tar Heel State, now the nation’s ninth most populous, has accomplished in nearly three decades of effort is, however, quite remarkable.

The rail passenger component of the North Carolina Department of Transportation (NCDOT) has long supported a semi-long-distance Amtrak train, the Carolinian, between Charlotte and New York City (704 miles), and has developed a growing 173-mile “Piedmont” corridor between Raleigh, the state capital and second-largest city (metro population 1.3 million), and Charlotte, the largest city (metro population 2.5 million), distinctly apart from Amtrak although operated by Amtrak train crews. North Carolina sets the Piedmont schedules, markets the service, owns the motive power and equipment—featuring its own distinctive paint scheme—and maintains it using outside contractors selected by the state at maintenance bases in Raleigh and Charlotte. 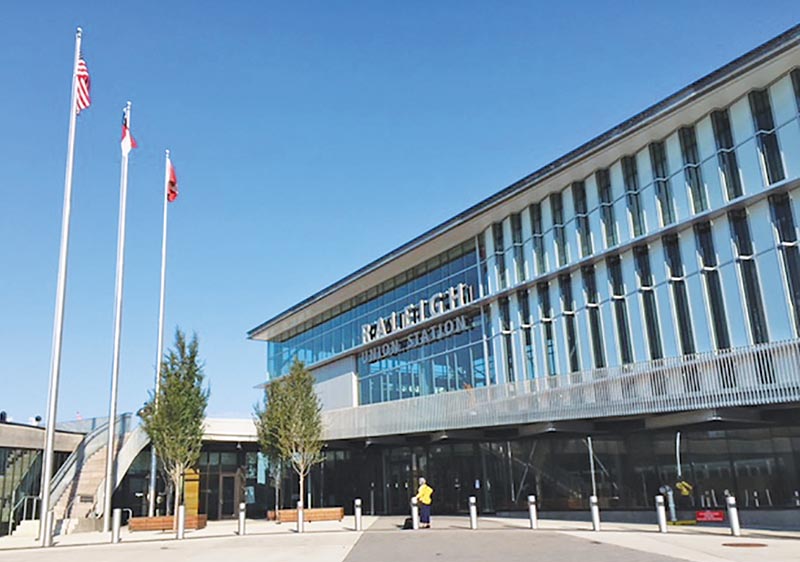 In addition to having the only high-level platform (out of sight to the left) between Washington and West Palm Beach, Fla., Raleigh’s impressive Union Station also features an outside train-watching deck, at the top of the steps on the left. Kevin McKinney photo

The trains appear as Amtrak service on its website and were shown in Amtrak timetables before Washington decided that timetables were a thing of the past. North Carolina disagrees with that assessment and continues to publish its own timetables for the Carolinian and the Piedmont services. There’s even a toll-free number to call for information (800-BY-TRAIN), and it is posted on numerous NC-BY-TRAIN signs along major highways in the state. When the number is called, Amtrak doesn’t answer, North Carolinians do.

The seed for state involvement dates back to 1984, when a Public Transportation Division was initiated by Gov. Jim Hunt, a Democrat. The first tangible result was the creation of the Charlotte–Raleigh–Richmond–Washington–New York Carolinian that year, giving Charlotte and Greensboro a daytime route to New York in addition to the nocturnal Crescent, and via a different route east of Greensboro, one that introduced Charlotte–Raleigh service for the first time in over 50 years, and added Richmond, Va., as an intermediate stop. Unfortunately, the train’s funding lasted only 10 months, and it was not until 1990 before it returned, under the administration of Gov. Jim Martin, a Republican. Meanwhile, in 1989, Gov. Martin’s Passenger Rail Task Force determined that the state should preserve essential rail corridors for future freight and passenger service and should establish additional passenger service be tween Raleigh and Charlotte. 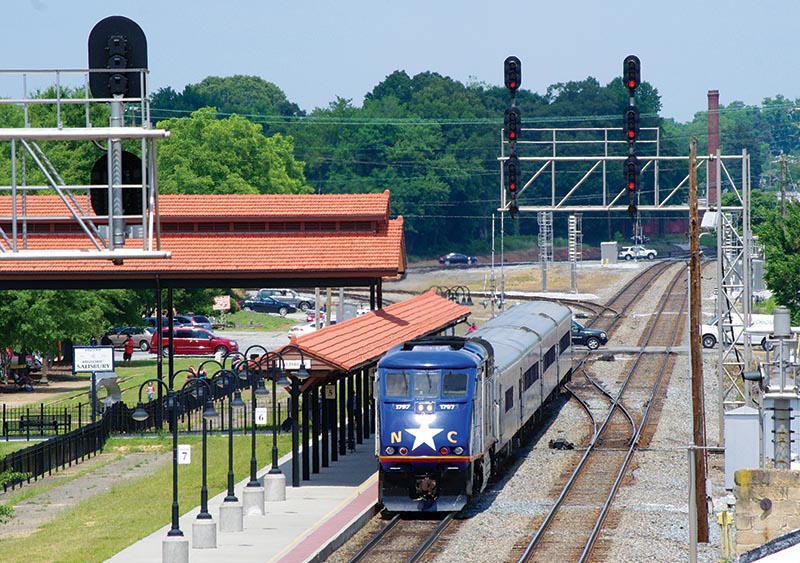 A westbound Piedmont stops at the Salisbury station on its way to Charlotte on May 30, 2014. The wye in the background is the line to Asheville, once the route of Southern Railway’s Asheville Special, which ran well into the 1970s. This line may eventually receive passenger service. Mike Schafer photo

In 1992, NCDOT formed a Rail Unit and in 1995 a stand-alone Rail Division was created. Plans for an upgraded, expanded Piedmont Corridor between Charlotte and Raleigh were developed. At first, Amtrak’s reaction was “We don’t have equipment,” according to Allan Paul, deputy director of the Rail Division. So, North Carolina decided to get its own equipment and thus was born the independent direction of the state’s program. Joining the Carolinian, the first Piedmont Corridor round-trip started May 25, 1995, and 15 years later a second round-trip was added on June 5, 2010. A third was added this year on June 4, and a fourth Piedmont train will be added in 2021, making a total of five trains daily in each direction between Charlotte and Raleigh…

Read the rest of this article in the 2018-04 issue of Passenger Train Journal!