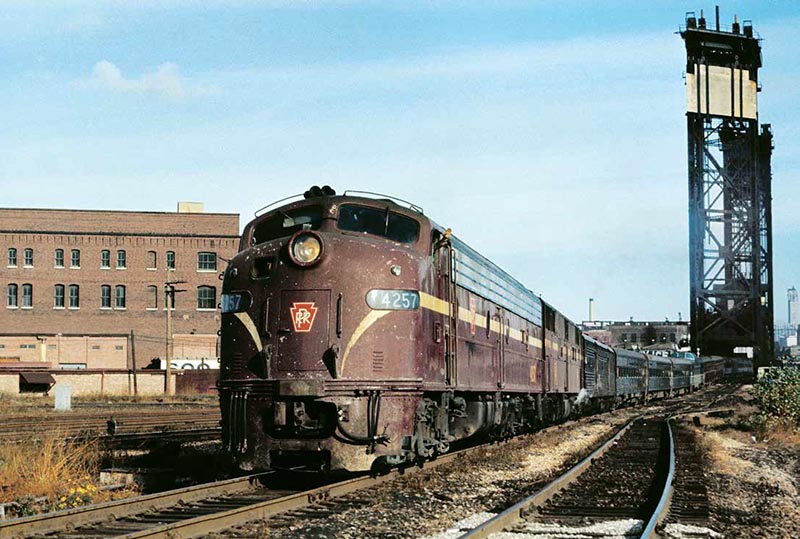 A somewhat scruffy PRR E8/E7 pair lead a spotless South Wind across the South Branch (Chicago River) lift bridge at 21st Street interlocking on its way out of Chicago Union Station in the late summer of 1966. A leased Northern Pacific dome-sleeper is already in service for the upcoming winter season. In about 12 miles, the train will leave the PRR’s Pittsburgh, Fort Wayne & Chicago main line and enter the South Chicago & Southern branch to reach the PRR’s Panhandle main line. Mike Schafer photo 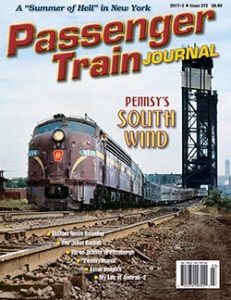 By John Kilbride/Photos as noted

Much has appeared in print on the subject of the Pennsylvania Railroad’s passenger train services between New York City and Washington, D.C., and cars carried farther by connecting partners into Florida and other southern points, as well as the PRR “Blue Ribbon Fleet” that went west to Pittsburgh, St. Louis, and Chicago— again, with some “through” cars conveyed farther south and west. A PRR train that stood alone was the South Wind between Chicago and Florida. It ran on PRR tracks only as far as Louisville, Ky.—initially every third day—and was operated in partnership with three other railroads. These factors made it unique in PRR’s general standard of train operations. With the different railroads involved, the beginning of joint services, and increased ridership, the history of the entire route can be a challenge to untangle. The route’s competition yielded at least five combinations of various railroads’ endpoints.

History of the Route

Passenger train service between Chicago and Florida can trace its origins to the “Dixie Route” and the 1885 debut of the Dixie Flyer to Jacksonville. This train operated over Chicago & Eastern Illinois to Evansville, Ind.; then Louisville & Nashville to Nashville; over the Nashville, Chattanooga & St. Louis Railroad to Atlanta; and finally Atlantic Coast Line to Jacksonville, initially as a “winter-only” operation. By the 1920s, the train was an all-Pullman special, serving both Florida coasts. Eventually, this Dixie Route fleet grew to six trains, all featuring variations of the “Dixie” name. 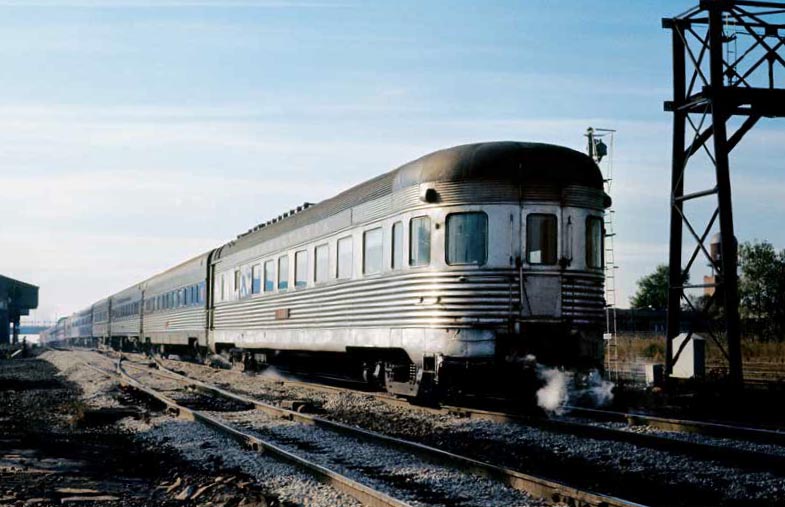 PRR diner-lounge observation car No. 1126 was built for the South Wind’s 1940 inauguration and trailed this southbound edition of the train departing Chicago in 1966. When delivered, the stainless steel car was painted Tuscan red along with the rest of the Budd-built PRR train. Mike Schafer photo

Illinois Central, which was operating legs of the Dixie Flyer out of Chicago and St. Louis by the turn of the 20th century, assembled a route of its own to Florida in 1908 by acquiring trackage rights into Birmingham, Ala., and obtaining control of the Central of Georgia Railroad the following year. In the fall of 1909, IC’s Seminole became the first year-round train to offer sleeping-car service between Chicago/St. Louis and Florida points.

The PRR began operating the Southland in December 1915, initially between Chicago and Cincinnati, then via L&N to Atlanta and a CofG/Georgia Southern & Florida connection via Tifton, Ga., to Jacksonville. There was also a joint operation with New York Central’s Flamingo, operating via Indianapolis and Louisville to Atlanta.

In 1935, the Florida Arrow debuted on the PRR-L&N-ACL-FEC route, offered as a seasonal coach-and-Pullman train. It reappeared as a daily train in the 1935– 36 season and operated until 1942.

By 1940, nine railroads were cooperating to offer service over three different routes between Chicago and Miami. Three distinct trains were provided, with each one departing every third day to provide the combined equivalent of daily service between endpoints. The Chicago partners were IC (City of Miami), C&EI (Dixie Flagler), and PRR (South Wind). Each was initially a coach-only streamliner and departed the end points at identical times.

(Initially, each of the routes was served by another train on the same route; this enabled daily service to be offered. PRR’s routing had the Florida Arrow and the Jacksonian.) 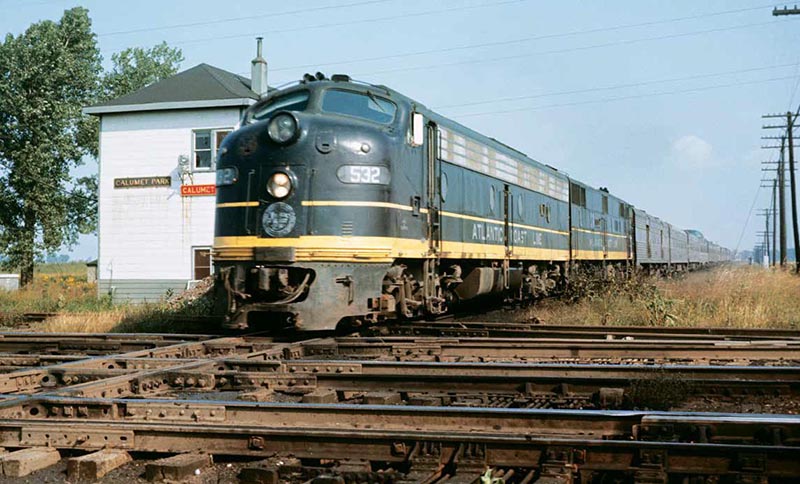 Debut of the South Wind

The PRR served three distinct north-south Midwestern corridors in the late 1930s: Chicago–Indianapolis–Louisville; Chicago–Cincinnati; and Chicago–Columbus. The popularization of vacation travel to warmer climes, and a desire to participate in this growing market, prompted PRR to explore ways to provide an expanded presence in Florida service via its operating partners. An order was placed with the Budd Co. in 1939 for a seven-car train set: a baggage-dormitory-coach, four coaches, a diner, and a tavern observation car. Railroad officials directed that the cars be painted in its classic Tuscan red scheme, with gold trim, a decision not warmly received by the manufacturer who felt its cars looked their best in their natural stainless steel, but also which would require the material to be specially prepared to receive paint. PRR prevailed and its fleet was delivered as requested. IC’s City of Miami, equipped with smooth-sided cars built by Pullman- Standard, appeared in a green and orange scheme, with yellow striping. The Dixie Flagler was delivered in unpainted stainless steel. The Flagler and South Wind were initially pulled by steam locomotives while the City of Miami featured a sleek Electro-Motive E6A diesel.

The trio of trains began operation in December 1940, with each following a different route to and from Jacksonville. The South Wind traveled over PRR rails from Chicago to Louisville. There, the train was turned over to L&N, which conveyed it to Montgomery. ACL then took over the run to Jacksonville, where the South Wind was handed over to the Florida East Coast Railroad for the final stretch to Miami. The 1,526-mile trip took 29.5 hours to complete. 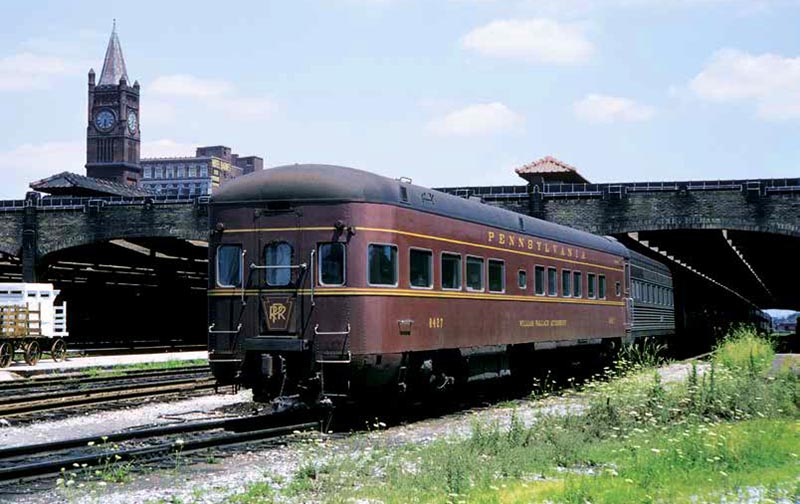 The three trains’ coordinated schedules provided a morning departure from Chicago and a Miami arrival early the next afternoon. The trains were quickly turned and left Miami the same afternoon, arriving back in Chicago just before bedtime the next day. The coordinated service gave passengers the convenience of daily service between Chicago and Miami, although the additional through trains on each route were discontinued during World War II. Tickets were honored on all three routes and even meal prices were standardized.

Like most trains of the time that operated in the South, the South Wind was racially segregated and the baggage-dorm-lounge car was reserved for African-American passengers, who were not allowed in the lounge observation car. Segregated food service was restricted to two tables behind a curtain in the dining car. The curtains came down after President Truman’s mandate forcing dining cars to integrate, although segregation would be continued by some dining-car stewards for years afterward.

While the new streamliners’ end-to-end running times were identical, their average speeds varied due to the differences in the route mileage and the numbers of stop made by each. The South Wind made 16 stops during its 1,559-mile run, for an average speed of 52.8 m.p.h. The City of Miami covered 1,493 miles with 25 stops, for a 50.6-m.p.h. average, while the Dixie Flagler posted a 48.6-m.p.h. average speed on its 1,434-mile, 17-stop trip.

By the winter of 1941–42, ten through all-coach trains linked the endpoints, operating on the every-third-day, one-nightout pattern. They were supplemented by three all-Pullman trains and three other coach/Pullman trains, also on one-night schedules. The coach/Pullman trains took two nights to cover the route. This pattern was short-lived with the start of World War II. Within a short time, only the coach-only trains remained…

Read the rest of this article in the 2017-3 issue of Passenger Train Journal!