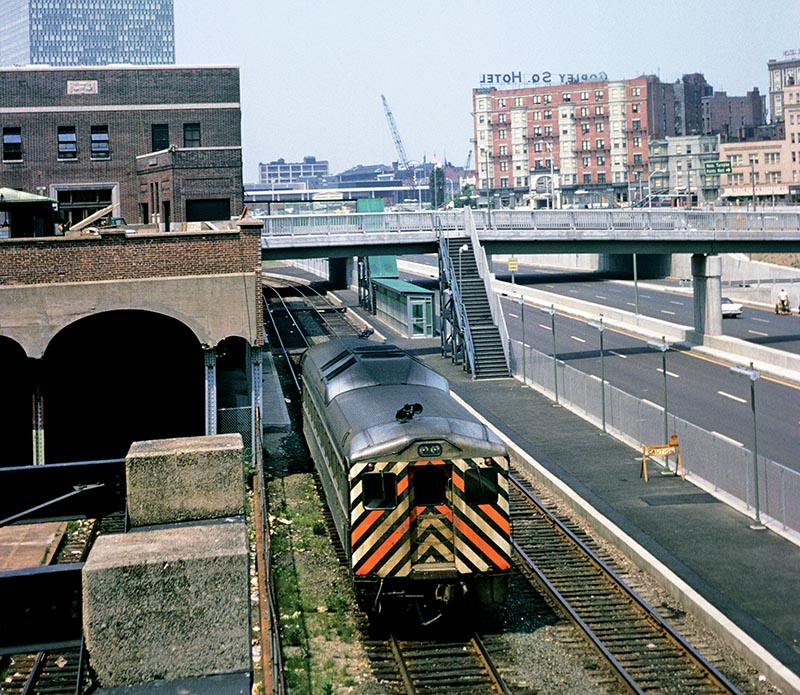 New York Central Boston–Albany “Beeliner” Train 405 at the Back Bay station in Boston, Mass., on June 6, 1965. Has this section of the Massachusetts Turnpike (Interstate 90) ever been so empty? 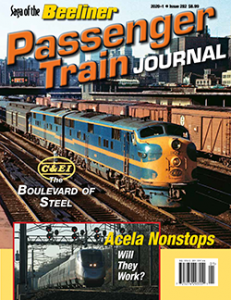 The Budd Company developed the self-propelled Rail Diesel Car (RDC) during 1949, and the RDCs began to appear on railroads in revenue service during the following year. Each railroad gave its RDCs a unique name; for example Boston & Maine’s cars were “Highliners,” while the B&O and the Susquehanna called their cars “Speedliners.” New York Central acquired 20 RDCs, named them “Beeliners,” and placed them in service on various lines throughout its system. The 200.4-mile route of the former Boston & Albany Railroad was one of the first locations where the Central operated RDCs.

Some Beeliners operated the entire distance between Boston and Albany; others covered schedules between Boston and Worcester or Springfield, Mass. On several occasions this equipment even ran as “Circuit Trains” from Boston to Riverside, Mass., via the ten-mile Highland Branch, returning via the B&A main line or vice versa. 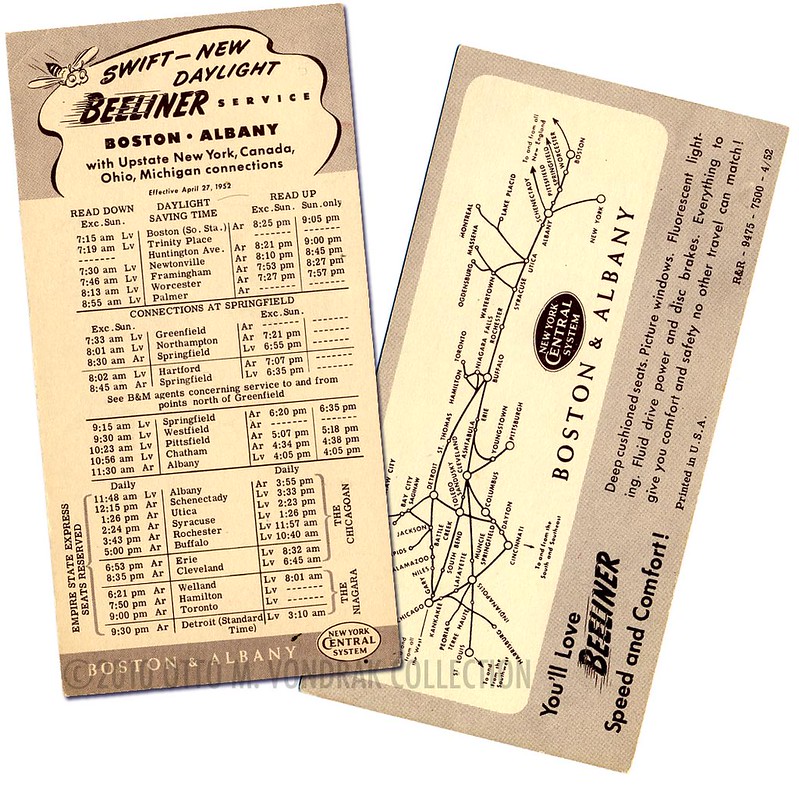 During the 1960s the Central was gradually reducing its passenger operations, and the service provided by the Beeliners was no exception. Gradually the schedules between Boston, Worcester, and Springfield were eliminated, leaving Albany–Boston Trains 404 and 405 running as the sole RDC-equipped trains on the line. Westbound 405 departed Boston in mid-morning and reached Albany in early afternoon. The RDC then left Albany shortly after 5:00 p.m. for the return trip to Boston as Train 404. Both trains connected at Albany with NYC mainline trains to and from such points as Cleveland, Chicago, and St. Louis.

New York Central filed its first case for discontinuance of Trains 404/405 during mid-1963. Protests were submitted and the Interstate Commerce Commission held public hearings at which numerous persons testified their use of and need for the train service. The discontinuance also was opposed by the regulatory agencies of New York and Massachusetts as well as by several railroad unions. In a decision rendered on Christmas Eve in 1963, the ICC ordered continued operation of the trains.

Citing lower ridership, the Central submitted its second request for elimination of the trains during the spring of 1965. Once again, protests were filed and the ICC scheduled a series of public hearings at which the railroad was to present its sup-porting evidence and members of the traveling public could be heard. Now, the ICC had a rule regarding the so-called “Feeder Value” of a train proposed for discontinuance that connected with other trains of the same railroad. Briefly stated, the rule provided that the train proposed for discontinuance should be credited with 50 percent of the “off-line” revenue generated from traffic handled on the branch line. Since half of the travel on the Beeliners was by passengers who transferred to or from main line trains at Albany, according to this rule Trains 404 and 405 should have been credited with 50 percent of the revenue the main line trains derived from connecting passengers traveling to/from such far away points as Chicago, Cincinnati, or St. Louis. 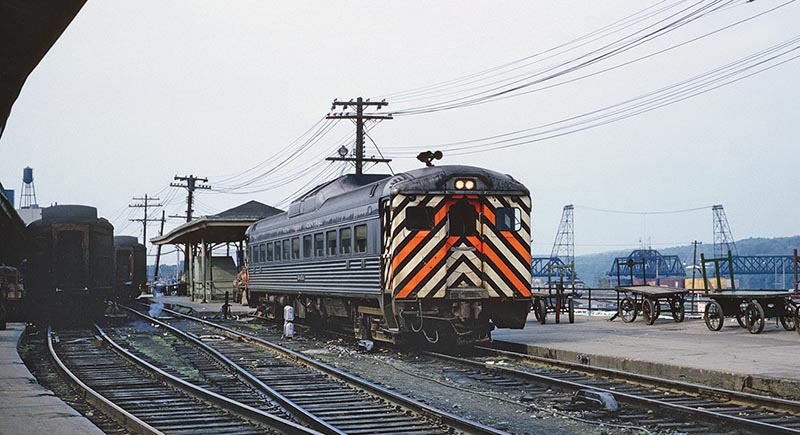 New York Central Train 404, the schedule for which is being protected by RDC M-454 on this day, is awaiting passengers at Albany Union Station on May 13, 1964.

During the hearings counsel for the New York Public Service Commission (NYPSC) repeatedly requested Central’s witnesses to produce the feeder revenue information for the Beeliners. The railroad refused to produce it, leading the NYPSC to argue that the trains would be profitable if credited with the proper feeder value. However, the ICC’s Hearing Officer took the position that the railroad has the burden of proof so he would not order production of this information. In other words, the feeder value evidence should be part of the case and if the railroad refused to produce it that was done at its peril.

Against this background the opponents were surprised to receive the ICC’s decision during August 1965 authorizing the discontinuance. What ever happened to the ICC’s “Feeder Value” rule? It was dismissed with a mere statement that “Feeder revenue generated by the small number of passengers using the trains is not of critical importance.” The trains made their last runs on September 27, 1965. Before that date, NYPSC filed a Petition for Reconsideration urging the ICC to reopen the case with a directive that NYC produce evidence of the feeder value which, it argued, would show that the Beeliner round trip was operated on a profitable basis. In other words, how can we know it is not of critical importance if we don’t even know how much it is? Three months later, and two months after the trains had been dropped, the ICC granted the petition and scheduled another hearing at which the feeder value evidence was to be produced.

At the new hearing, Central did its best to confuse the issues. However it became apparent that during 1964, the feeder revenue was $201,938, resulting in feeder value to the Beeliner trains of $100,519. The bottom line was that a “loss” of $47,037 became a profit of $53,482. One of the Central’s arguments was that two-thirds of the Beeliner passengers would switch to Trains 27 and 28 (the remains of the New England States), the other set of trains operated on the route. The ICC rejected this, observing:

Such differences in time and scheduling render the assumptions by Central practically valueless for the purpose of considering the savings alleged to be attainable upon the discontinuance proposed. While we recognize that some patrons would use other Central trains, the number or percentage is entirely speculative.

In its decision rendered September 2, 1966, the Commission ordered restoration and continued operation of the trains for one year, the maximum time period for which it was authorized to do so by law. 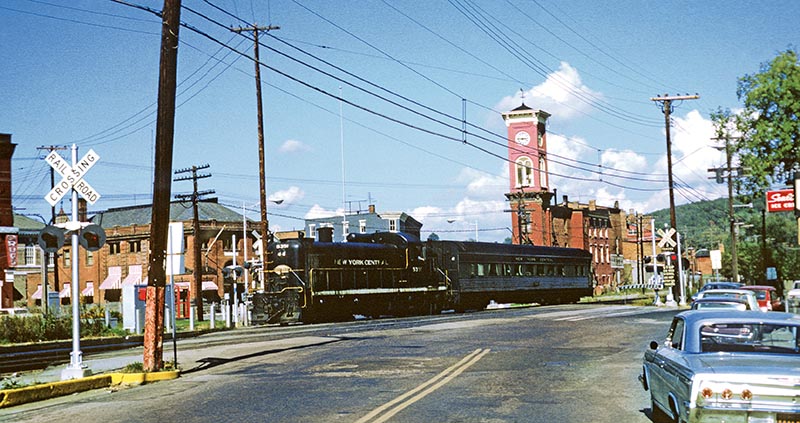 Numerous trips were made with conventional equipment rather than a more economical RDC. Here at Chatham, N.Y., on September 17, 1967, an Alco road-switcher and a postwar Budd-built coach serve as this day’s 405/404 turn.

When Trains 404 and 405 resumed operation on November 28, 1966, it was with an Alco RS-3 diesel locomotive and a single coach—not the RDC car that had been used in the past. Thus a fireman now was required, increasing the crew to three rather than two with the RDC operation with a corresponding increase in the operating costs.

During November 1967, the Central and the NYPSC had reached agreement on the restructuring of the “Water Level Route” passenger service between New York City and Buffalo; the new “Empire Service,” based on memory schedules, was inaugurated on December 3, 1967. As part of this project, the NYPSC staff had wanted to integrate Trains 404 and 405 into the Empire Service schedules but the Central refused to discuss the matter. The reason soon became apparent when, once again, the railroad filed to discontinue the Boston–Albany trains.

Public hearings on the new proposal were held during the winter of 1968. This time the NYPSC raised many new arguments in opposition. First, there was the additional cost resulting from the railroad’s deliberate act of failing to use RDC equipment. Perhaps even more important was the fact that a public timetable showing the restored trains was not issued until April 30, 1967, five months after the trains had resumed operation. And even then, the connections to Cleveland, Cincinnati, Chicago, and St. Louis were shown only in the eastbound direction whereas reasonable westbound connections also existed. Finally, connections with New Haven trains at Springfield were omitted even though they were shown in New Haven timetables. When asked to explain this, the Central’s witness had to be given a New Haven timetable to look up the connections. Some observers concluded that this reflected the different attitudes of the two railroads toward passenger service.

It would have been interesting to be a fly on the wall in NYC offices when the ICC’s June 17, 1968, decision arrived. In ordering continued operation the Commission noted:

Contrary to the Central’s contentions, it is obvious that these inconsistencies and omissions are misleading to the traveling public. Moreover, the railroad has failed to explain why it waited five months to include the considered service in its system time-table with the result that the traveling public could not be aware of the service actually provided by the Central except upon direct request and by oral explanation. It is readily apparent that the revenues of trains 404 and 405, and at least of the westbound trains after April 29, 1967, would suffer from the carrier’s action.

The ICC also pointed to the failure to show the New Haven train connections at Springfield, the refusal to discuss integration of the trains into the Empire Service schedules with the NYPSC, the poor on-time performance and the deliberate act of increasing the costs by use of a locomotive and coach instead of a Beeliner. Continued operation was ordered for six months…

Read the rest of this article  in the First Quarter 2020 issue of Passenger Train Journal! Subscribe today!