The westbound El Capitan and Super Chief pause at La Junta, Colo., in May 1965. From here, the two trains will run a few minutes apart, with the Super Chief leading, all the way to Los Angeles. Delivered by Pullman-Standard in 1947 as 24-duplex-roomette sleepers, Santa Fe’s dozen Indian-series cars were rebuilt in 1964 with 11 double bedrooms, keeping their original names. —Jim Neubauer photo, Kevin EuDaly Collection 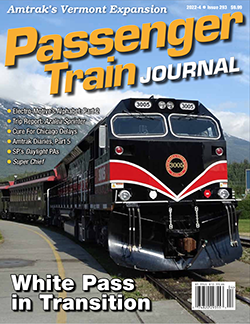 Those of us born as Baby Boomers in the 1940s could not help being saturated in every aspect of life by the familiar “Warbonnet” paint scheme and Southwest Indian motifs projected by Santa Fe Railway.

In the post-World War II era, Lionel introduced O27 and O-gauge replicas of the Super Chief. Santa Fe was a staple for S-gauge American Flyer trains, and later, to this day, HO productions. Growing up in Chicago, one witnessed Santa Fe advertising nightly on the CBS 10:00PM news with anchor Fahey Flynn and weatherman P.J. Hoff. The commercials featured speeding Chiefs, narrated by a smooth pitchman. The jingle accompanying the commercials was, “It’s fun to ride the train today when the train you ride is Santa Fe. Santa Fe all the way.” The emphasis was usually on the posh, extra-fare Super Chief. Fortunately, I would experience Santa Fe’s Super Chief a number of times, as well as the very early Amtrak version that was run by Santa Fe at Amtrak’s behest, upholding Santa Fe’s traditions.

Trip 1, July 1962:
Chicago–Williams Jct., Ariz.
My first opportunity to ride the Super Chief finally arrived in summer 1962, when my mom, a Chicago public school teacher, and her older sister decided to take a 14-day Cartan Tour to the Grand Canyon, San Francisco, Yosemite, Los Angeles, and Las Vegas, via train. Those were the days when bundled tours, including meals, lodging, bus transfers, and sightseeing, were still popular for touring the West, and were particularly appealing to unescorted women. Frankly, I was more excited to finally travel on the Super Chief than having an entire day in Disneyland.

Upon arrival on a sultry evening, Chicago’s Dearborn Station, encased with diesel fumes, evidenced a multiple line-up of sleek, silver Santa Fe trains as far as the eye could see, including the Texas Chief, El Capitan, and Super Chief. Some rail writers have opined that the Super Chief was not the last all-Pullman streamliner. I beg to differ. New York Central’s 20th Century Limited added coaches in 1958 and Slumbercoaches in 1961. Baltimore & Ohio’s Capitol Limited combined in 1958 with its running mate, the Columbian, while Pennsylvania Railroad’s Broadway Limited lost its status and name in 1967 when it was combined with the General. Illinois Central’s Panama Limited added a coach section called the Magnolia Star in 1967.

Only Santa Fe maintained the exclusivity of its dining and lounge services for only Super Chief Pullman passengers, even when combined, off-season, with the El Capitan starting in 1958. The key to this all-first-class distinction was always the separate dining and feature cars, emphasized by the sign in the vestibule between the sections stating: “All First Class Cars Ahead.” 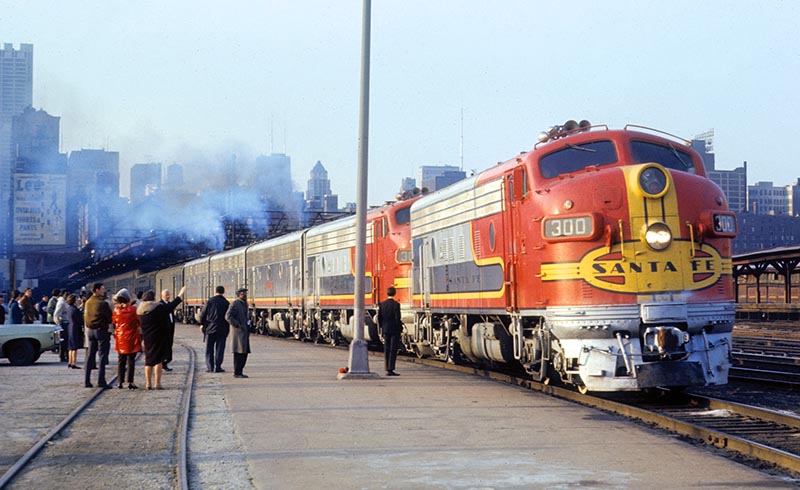 ABOVE The last Santa Fe Super Chief, about to depart Chicago’s Dearborn Station on April 30, 1971, the eve of Amtrak. Starting the next day, Amtrak’s Super Chief and Texas Chief will call at Union Station. —Kevin EuDaly Collection

With respect to the longstanding hands-on, pro-passenger commitment of Santa Fe management, when the baton was passed between CEOs from Ernest Marsh to John S. Reed in 1966, Santa Fe already exuded an understanding of how to maintain, market, and build upon its Chiefs branding in advertising and distinctive train brochures.

As well, Santa Fe appreciated how to distinctively segment its market beyond the combining of the Super and El Cap during the off-season, by adding a separate coach section to the all-Pullman Super Chief during the high summer season between June and September. This coach section of four 44-seat chair cars, with their own full dining and lounge cars, ran forward of the Super Chief’s first class section, and had its own special fare surcharge. In contrast, Union Pacific operated separate coach and Pullman sections of the City of Los Angeles during summer and winter holiday seasons, but coach passengers on the Challenger were relegated to a coffee shop/lounge car, without any attempt to build loyalty by providing a full diner with white linen service, or a separate lounge car — on a much longer schedule.

As passenger trains operated then on Daylight Saving Time (until 1966, when times were standardized), that meant our departure was actually at 7:30PM, not the 6:30PM time listed in the timetable. According to operating procedures, the El Cap departed at 7:30, with the Super following 10 minutes later. The trains would meet the next morning at La Junta, Colo., where the Super would take the lead from there into Los Angeles. At La Junta, I walked our consist until the last sleeper, where I came upon the drumhead announcing I was on the Super Chief…

Read the rest of this story in the 4th Quarter 2022 issue of Passenger Train Journal. Subscribe Today!