UP’s Butte Special following arrival at its Montana namesake in July 1969. The UP used the Northern Pacific depot here, and the Butte Special even had its own dedicated track. On this day, a number of people off the Butte Special transferred to the eastbound NP North Coast Limited. Mike Schafer photo 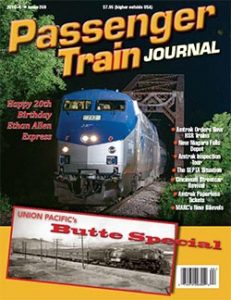 By Thornton Waite/Photos as noted

The Butte Special was a Union Pacific passenger train connecting Butte, Mont., and Salt Lake City, Utah, providing a vital service to the sparsely populated area in eastern Idaho and southwestern Montana— an area with poor roads to boot. UP provided this passenger service between the two cities for 90 years, operating the trains under a variety of names and numbers. As a night train, the Butte Special had sleeping cars and coaches and survived until Amtrak began on May 1, 1971, albeit on a tri-weekly schedule. It was one of the few north-south UP passenger trains in UP’s world of numerous east-west services.

UP’s Salt Lake City–Butte line began life in 1871 as the Utah Northern Railroad, later reorganized under the auspices of UP and rail baron Jay Gould as the Utah & Northern Railway. Established by the Mormons, the railroad initially was a three-foot narrow-gauge operation extending northward from Union Pacific’s transcontinental main line—the Overland Route—at Ogden through the Cache Valley in Utah. At Pocatello, Idaho, 134 miles north of Ogden, U&N intersected another UP subsidiary, the Oregon Short Line Railway, which built a direct route between UP’s Overland Route at Granger, Wyo., and Huntington, Ore. Pocatello thus became an important interchange location for UP.

The next major city on the line to Butte is Idaho Falls, where cars were sometimes interchanged to and from trains plying the Yellowstone Branch. From Idaho Falls it was a 200-mile trip through remote countryside to Butte, the end of the line.

In 1881, even before U&N reached Butte, the railroad advertised a daily express train and two freight trains over the 354 miles between Ogden and Melrose, Mont.—the end of the line at the time and a mere 38 miles short of Butte. The gap was short-lived, with U&N reaching Butte by the end of 1881. U&N trackage actually ended at Silver Bow, Mont., where trains entered trackage rights on Northern Pacific for the remaining seven miles into Butte.

Passenger operations in the early years

In the operation’s first decades, UP’s through trains between Salt Lake City, Ogden, and Butte were pretty much the conventional passenger trains of the era: locomotive, baggage, express, mail, and passenger cars. After the branch lines off UP’s Butte main line were constructed, mainline trains could make connections with branchline runs, some of which were mixed trains—that is, freight trains also providing limited passenger accommodations. 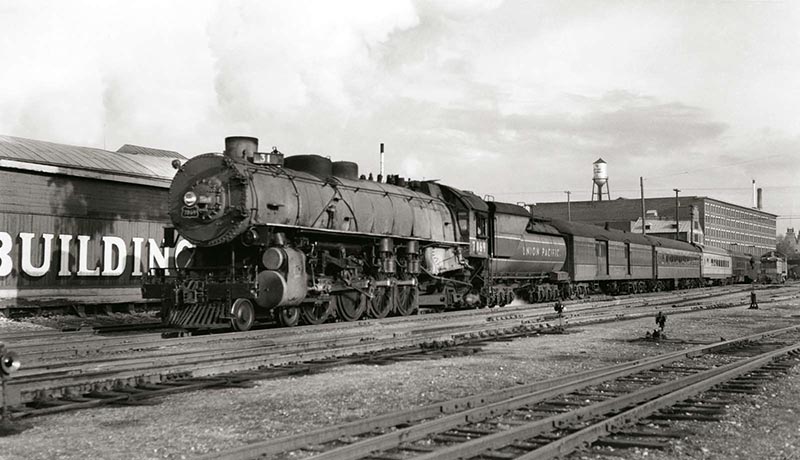 None of the Salt Lake City/Ogden–Butte trains were particularly fast. In 1885 it took 23 hours to travel between Ogden and Butte, and the last scheduled passenger trains in 1971 took approximately 12 hours to travel between Salt Lake City and Butte, a distance of 433 miles. In the beginning years of operation, the trains were scheduled to connect with the transcontinental trains at Pocatello, so the departure and arrival times at Butte were not always at a convenient time.

The first sleeping cars on the line ran in 1881; the railroad reported that it owned five Pullman sleeping cars in 1885, but no dining cars. The narrow-gauge sleeping cars were so small that the berths were too short for a six-foot-tall person. By 1885, U&N was advertising a daily express train, two fast freights, and two more third-class (freight) trains in each direction. The first passenger trains usually comprised a mail-baggage-express car, a smoking car, a passenger coach, and a Pullman sleeping car.

UP’s line to Montana never rated the latest equipment, but at the turn of the twentieth century the railroad advertised its new buffet, smoking, and library cars which were available on the connecting trains between Chicago and Salt Lake City. The advertisements noted that these cars, introduced in 1896, were the first such cars in service west of the Missouri River and that connections were easily available over the line to Butte. 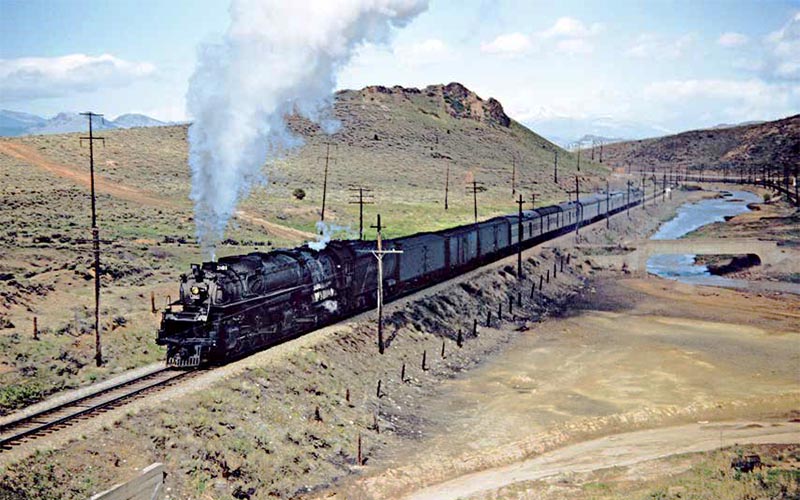 Certainly not under-powered, the northbound Butte Special is on the last lap of its trip into Butte rolling along the Northern Pacific main line parallel to The Milwaukee Road’s Pacific Extension main line between Silver Bow and Butte on May 27, 1951. UP 4-6-6-4 Challenger No. 3801, heads up this run. Author’s Collection

In 1900 the Short Line advertised train service to Butte showing connections with Union Pacific; Denver & Rio Grande; Southern Pacific; and the Oregon Railway & Navigation Company. The January 1908 OSL timetable gives a good indication of what passenger travel was like early in the century. There were two trains a day in each direction between Salt Lake City and Butte. Trains 7 and 9, both named the Butte & Portland, ran between Salt Lake City and Butte, taking approximately 15 to 16 hours for the trip. The southbound trains, No. 8, the Salt Lake & Eastern, and No. 10, the Salt Lake Express, took approximately the same amount of time. Connections were made with branchline trains at Idaho Falls as well as with the mainline trains at Pocatello, Ogden, and Salt Lake City. There was additional service between Salt Lake City and Ogden as well as between Salt Lake City and Pocatello and Idaho Falls. Over the years many of the trains carried dining cars, but when the trains did not have a dining car, meal stops were made at places such as Lima, where food was available at the Club House, or at Dillon.

The first through service from Montana to southern California was announced on Nov. 27, 1911, when the Butte Miner newspaper reported that on the following Thursday, Nov. 30, through Los Angeles–Butte sleepers would be run over the new (in 1905) San Pedro, Los Angeles & Salt Lake Railroad. In 1919, the United States Railroad Administration, which had been operating the nation’s railroads during World War I, continued service between Salt Lake City and Butte with somewhat lengthened schedules, presumably to cope with postwar-related traffic. It’s interesting to note that the trains were listed by number only; names had temporarily been banished. This daily service of two trains each way continued into the Great Depression, with some notable schedule and time adjustments.

The day train between Salt Lake City and Butte was discontinued in April 1942, some five months after the U.S. entered World War II, and was replaced by bus service north of Idaho Falls, despite the increase in traffic due to the war. However, it was reinstated in late 1942 or early 1943. The day trains’ unprofitability led UP to apply to the Idaho Public Utilities Commission in 1949 to discontinue trains 33 and 34 between Idaho Falls and the Montana state line.

Hearings were held, and despite the protests of the railroad unions and merchants at locations such as Idaho Falls and Dubois, permission to discontinue the train was granted. In that year Union Pacific reported that in Montana it received $94,478 in passenger revenue, $85,764 in mail revenue, $12,946 in express revenue, and $2,126 in milk revenue, compared to $1,702,935 in revenue from transporting freight. These figures show how important the mail and express business was to the operations of the passenger trains, since the head-end revenue was greater than the passenger revenue. The IPUC found that there was insufficient use of the trains and that alternate modes of transportation, notably bus service and private automobiles, were available. Permission to discontinue the train was granted on June 11, 1949, requiring the railroad to give 10 days notice prior to actual discontinuance. At this time the night train, Nos. 29/30, was renamed the Butte Special…