WASHINGTON — Not long after President Joe Biden announced his $2 trillion infrastructure plan on Wednesday, Amtrak released a bold vision for the future that calls for 30 new routes and 20 million more passengers in the next 15 years.

According to the New York Times, Biden wants to spend $85 billion on public transit and at least $80 billion on Amtrak and the freight rail system. Amtrak already has some ideas on how it would spend that money, with proposals for new routes in the Northeast, Midwest, South and West. Some of the more notable proposals called for new corridor service between Los Angeles and Las Vegas; Houston and Dallas; Pueblo, Colo. and Cheyenne, Wyo.; and new services radiating out of Atlanta to Nashville, Montgomery and Savannah. Amtrak officials also said they would be able to add increased services on many routes, particularly in the Northeast and Midwest. 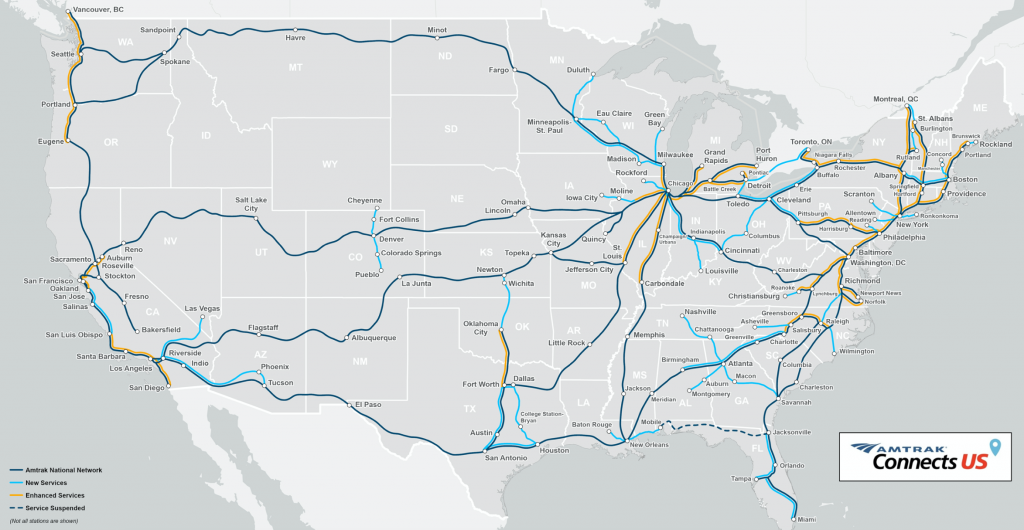 Amtrak is proposing 30 new routes connecting 160 new communities in the next 15 years.

Beyond expansion, Amtrak CEO Bill Flynn said Biden’s plan would enable the railroad to repair bridges and tunnels along the Northeast Corridor.

“President Biden’s infrastructure plan is what this nation has been waiting for,” Flynn said. “Amtrak has a bold vision to bring energy-efficient, world-class intercity rail service to up to 160 new communities across the nation, as we also invest in our fleet and stations across the U.S. With this federal investment, Amtrak will create jobs and improve equity across cities, regions, and the entire country – and we are ready to deliver. America needs a rail network that offers frequent, reliable, sustainable and equitable train service. Now is our time, let’s make rail the solution.”

Freight railroads would also benefit from the deal, although details of exactly how were not immediately available. The reaction from the industry’s two primary lobbying organizations was mixed, with the American Short Line & Regional Railroad Association enthusiastically embracing it and the Association of American Railroads expressing caution over how it would be paid for. Biden has proposed paying for his infrastructure plan by raising the corporate tax rate.

“America’s railroads have long recognized the need for robust, sustainable funding back into the nation’s integrated transportation network,” said AAR President and CEO Ian Jefferies. “President Biden’s proposal makes clear his administration’s priority for making these much-needed investments to restore our highways, bridges and roads, and improve our ports. At the same time, mission number one is fueling economic recovery. Railroads would urge the administration and Congress to abandon these divisive, unrelated funding sources and instead work toward bipartisan solutions to restore the Highway Trust Fund to a true user-pays system.”