Amtrak train 461, the southbound Valley Flyer out of Greenfield, Mass., is treading it way through the bucolic countryside south of Deerfield, Mass., on Saturday, February 29, 2020. This train operates as a turn that originates in Springfield as Valley Flyer Train 400. As southbound 461, it will operate through to New Haven to make connections with Northeast Corridor trains to New York. Photo by Doung Manson 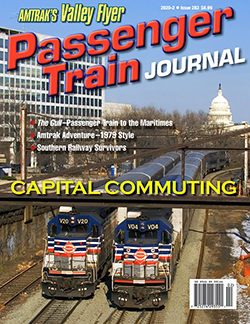 By Scott Ornstein/photos as noted

In late 2014, after a multi-year effort, the Massachusetts Department of Transportation (MassDOT) completed a $75 million project to restore the tracks paralleling the Connecticut River between Springfield, Mass., and East Northfield, Mass., on the Vermont border. Upon completion, Amtrak was able to restore Vermonter service along this route for the first time since 1987, when Montrealer service had been suspended due to poor track conditions. The Montrealer was revived in 1989 on a new route be-tween New Haven, Conn., and East Northfield, Mass., via Palmer, Mass., and a stop in Amherst, Mass. (see “The Palmer Shuffle,” PTJ 259, 2014–2). The MassDOT project provided a faster, shorter trip between Springfield and Brattleboro for the Vermonter along the Connecticut River Line, as higher speeds would be permitted on the rehabilitated trackage, and the reverse move between Palmer and Springfield eliminated. Amherst lost its Amtrak stop, but Northampton, Mass., regained it (and has provided considerably more patronage than Amherst), and Amtrak service was inaugurated at Holyoke and Greenfield. Both of those cities had not seen passenger train service since 1967 when Boston & Maine discontinued its passenger operations on this route.

During construction, there was talk of inaugurating a “commuter” type service to the three new Massachusetts stations to supplement Amtrak’s Vermonter, but it wasn’t until the summer 2018 opening of Connecticut’s CTrail Hartford Line, with its expanded train service between New Haven and Hartford, Conn., and Springfield (informally known as the “Knowledge Corridor”), that this new service, dubbed the Valley Flyer, could become a reality. Sponsored by MassDOT at a cost of approximately $1.0 million annually and operated under contract by Amtrak, the Valley Flyer began its two-year experimental operation on August 30, 2019. 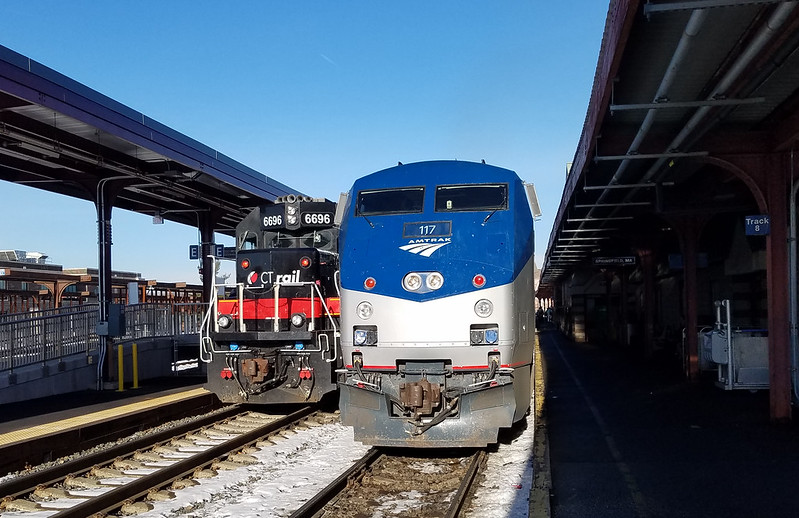 The new service provides residents of the Pioneer Valley of western Massachusetts with additional rail service along this corridor, with connections at New Haven to Amtrak’s Northeast Corridor trains to New York, Philadelphia, and Washington, D.C., as well as to Metro-North service to Grand Central Terminal in New York, and intermediate stations in both Connecticut and New York. CTrail’s other commuter service, Shore Line East, to Old Saybrook and New London, Conn., can also be accessed at New Haven.

An underlying goal of the Valley Flyer is to allow Pioneer Valley residents to be able to travel to New York and Connecticut and back in one day. As such, the Valley Flyer operates only in the mornings (southbound), and late evenings (north-bound), though on different schedules for weekdays and weekends. Customers also have the option of utilizing Amtrak’s Vermonter, whose daily runs pass through the area during the middays. On weekdays, Valley Flyer departures from Greenfield are currently at 5:45AM (Amtrak train 495) and 7:35AM (train 471). Upon arrival at Springfield, these trains continue south to Hartford and New Haven with the aforementioned connections at New Haven to Amtrak and Metro-North trains arriving New York in the late morning and early afternoon. Northbound, Valley Flyer trains arrive back at Green-field at 10:23PM (train 494) and 12:38AM (train 478), with connections at New Haven from New York departing between 5PM and 6PM, the heart of the evening peak period, and again between 7:30PM and 8PM, toward the end of the evening peak. 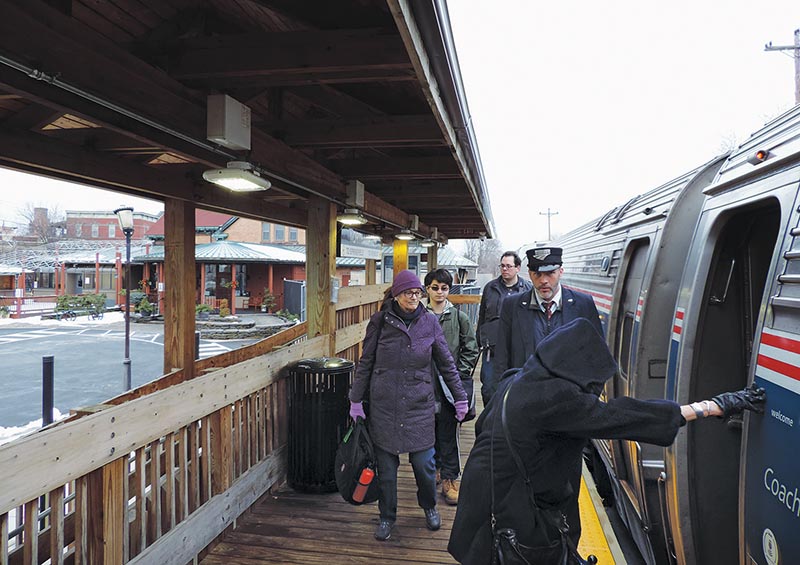 Shown on January 20, 2020, the new Northampton station was built expressly for Vermonter and Valley Flyer service. In the background is the original Northampton Union Station, which long ago served Boston & Maine and New Haven and in more recent times Amtrak’s Montrealer. Today, it has been beautifully restored and serves as a bar-restaurant and banquet facility. Scott Ornstein photo

Weekend service is different, with a mid-morning southbound departure from Greenfield (train 461) at 9:15AM, but then not again until 8:10PM (train 499). This latter train terminates at Springfield, but connects to a CTrail Hartford Line train for travel to the south. Northbound week-end service consists of what is basically an equipment positioning move, though still a revenue train (train 400), departing Springfield at 7:50AM, with an 8:58AM arrival in Greenfield, before turning for train 461, followed in the evening by train 488, a 6:45PM departure from Springfield and a 7:53PM arrival in Greenfield (train 488). Train 488 then turns for 499, the shuttle back to Springfield…

Read the rest of this story in the Second Quarter 2020 issue of Passenger Train Journal!

The Blue Line Trolley extends the system from the U.S./Mexico border all the way north to the University community.

The modernization effort will greatly improve accessibility with high-level platforms and elevators at the NJ Transit station.