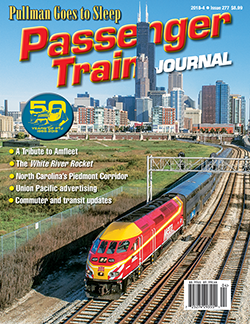 Richard Anderson has been held to a draw so far as president of Amtrak, but no one should assume he won’t keep trying to dumb things down. For now, he has decided to keep all trains running into 2019, including the Southwest Chief, but he offered no guarantee as to how long he will do that.

Technically, the reason Amtrak will keep all trains running is that Positive Train Control will not be completed and adequately tested for many months. Amtrak Chief Operating Officer Scot Naparstek told a House subcommittee on railroads that “interoperability” issues with other railroads that operate on Amtrak tracks, and with railroads whose tracks Amtrak uses, will take some time to iron out.

“When 2019 arrives, we will have our track, computer, training and locomotive PTC work complete and will be operating PTC across all of the tracks we control and across much of the host railroad net-work,” Naparstek told the subcommittee, which called the hearing to receive a PTC progress report. However, he said the freight systems must be able to commu-nicate with the Amtrak system, and that will require months of testing. At another hearing, Naparstek said Amtrak plans on running the Southwest Chief “as is” through fiscal year 2019, assuming that Senate legislative language requiring the Chief to continue to operate reaches final passage. One of Anderson’s dumbest ideas is to kill the Chief at its mid-section between Dodge City and Albuquerque, end sleeping-car service, and shift passengers to a 10-hour bus trip over curving two-lane roads, as opposed to the six-hour train trip. That will never happen, and the only possible reason to do it is to kill the train.

All this back-and-forth is meaningless as long as Anderson is president of Amtrak. It is still curious that he will not talk to newspaper or TV reporters, angrily ordering them away when he discovers who they are. Luckily I heard about him in time to avoid being insulted. I don’t talk to him either.

For those few of you who don’t know about Anderson, he doesn’t talk to or listen to anyone unless he thinks they can do him some good. He even decided to kill several fare plans on three California routes where those decisions are controlled by state agencies, not Amtrak. He apparently didn’t know that. Those agencies told him to get lost. His experience is with airlines, not railroads, and it shows. I have said repeatedly that all his dumb ideas will fail, but he will do nothing to help Amtrak grow. Amtrak needs a CEO who will fight to expand Amtrak, not to shrink it.

Anderson has unnecessarily complicated Amtrak’s operations and has made enemies of people who should be friends. His last-minute cancellation of the U.S. Marine Toys for Tots train means that a lot of poor kids won’t get Christmas presents this year. I have suggested that the Marines should contact their friends on Capitol Hill and suggest that Anderson be fired. Several members of Congress wrote, nicely asking Anderson to change his mind. “This holiday season would mark the 20th year of this longstanding and generous service. We have been deeply moved by the spirit of community and love for our children that are expressed through this program, and we sincerely hope that the tremendous good it does will not be lost this holiday season,” the lawmakers wrote. As far as I know, they received no answer.

Anderson substituted boxed meals for real dining cars on two routes in the East. How unnecessary that is. Anderson has also unnecessarily complicated the move-ment of private cars, including a strange order that passengers can’t ride on back platforms. I have suggested that private-car owners put as many people as safely possible on back platforms and take Anderson to court if he takes action against them. The association representing pri-vate car owners is not without political power and should use it.

Notice that all the problems above would disappear if Anderson was dumped and a responsible person was named to succeed him. The Toys for Tots train would run as it usually does. Private cars would run anywhere as they used to, and owners and guests could ride on the back platform. Dining cars would return as soon as possible to trains in the East. Amtrak and the states would cooperate. Amtrak would have a good relationship with Congress. Amtrak’s press people would start smiling again.

That sounds good to me.