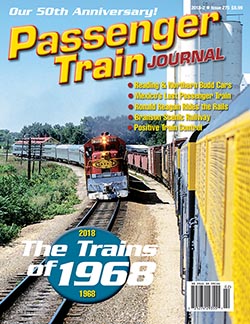 This column will build on the questions I would have asked Amtrak President Richard Anderson about the mistakes and missteps of his first couple of months in charge if he would agree to talk to any reporters. The column will quote professionals who are in charge of Amtrak service in various states and who are engaged in snarling at Mr. Anderson for failing to consult them before making decisions that they consider stupid.

The most stinging criticism came from California where the three people in charge of the major California routes signed a letter questioning his decisions and telling him they would reverse some or all of them. The three officials who signed the letter are David Kutrosky, managing director of the Capitol Corridor; Stacey Mortensen, executive director of the San Joaquins; and Jennifer Bergener, managing director of the LOSSAN Rail Corridor Agency. The stinging letter said the discount programs that Mr. Anderson proposed for reduction or elimination generated $27 million in revenue for the three routes last fiscal year along with ridership of more than 1.1 million.

“We have worked closely with Amtrak’s field marketing team and devoted considerable resources to developing and implementing campaigns to raise awareness of Amtrak’s everyday discounts, which are popular with our passengers,” the California letter said. “The continued growth in ridership and revenue on our three routes over the past several years is reflective of the success of these marketing programs. Our agencies have ongoing and planned marketing campaigns centered around promoting everyday discounts. These programs would have to be cancelled or significantly altered if these fare policies take effect.

“Amtrak’s proposed implementation is also problematic. The short time frame does not allow for sufficient messaging to clearly communicate the adjustment to passengers. Additionally, these changes come as we approach the winter season. The months of January through March historically have lower ridership and we rely on these everyday discounts to help fill empty seats. With that, we cannot accept these policy changes …. We also cannot accept future proposed changes to Amtrak cancellation policies and fees in the absence of additional information, including a business case that details projected ridership and revenue impacts on each of our routes.”

I could go on and on about the letter, but you get the idea. It wasn’t pretty.

The manager of Amtrak operations in another state (I had to eliminate parts of his note to protect his identity) said Amtrak made changes to its fare structure “without any consultation with the states and took us all by surprise. Amtrak took offense when the states got mad.” I also sent his redacted note to Anderson. “Empire is not the same as the Downeaster, which is not the same as the Capitol Corridors, which is not the same as the NEC,” he wrote, adding, “With the buyouts many knowledgeable middle managers are now gone and nobody is there to fill the vacuum. That may be good for cost cutting, but now I have a hard time getting any answers out of anyone.”

Anderson is rumored to be planning many stupid things. For instance, he threatened to cut many trains based on the false belief that Positive Train Control must be in place at the end of this year for all passenger trains. That’s not the case in Vermont or New Hampshire as well as on many other lightly used main lines around the country. I don’t know if the man has the sense to understand that Congress will block any effort to kill any train anywhere in the country. Anderson is downgrading long-distance trains as much as possible, but at least (so far) he hasn’t killed sleeping cars or replaced diners with automat cars. He is rumored to be considering odd sorts of equipment in the Northeast Corridor.

Anderson upset steam locomotive groups and private-car operators by saying there would be no more such trips with insurance coverage by Amtrak, and few private cars can be operated. The private- car operators have political clout, so they may be able to force him to do their bidding. There is also a question whether he meant to kill most steam locomotive excursions. Besides, the Union Pacific, for example, self-insures its steam locomotive operations. Once again, Anderson has spread confusion without thinking.

On a more pleasant note, I went from Albany, N.Y., to Washington on Wednesday March 7, in the middle of one of the coastal storms that struck the East Coast in March. I had decided to splurge on a first-class Acela trip from New York to Washington, but I got a call on my cell phone from Amtrak the night before I left telling me all Acela had been cancelled for my travel day. I was switched to a regular train in Business Class. My fear was that all corridor trains would be cancelled and I would have to find a hotel, but that didn’t happen.

Instead, the train left New York a few minutes late. I settled into a window seat and viewed the increasing snow storm from the warmth of the car. The snow swirled in all directions, creating a winter wonderland outside. After leaving Trenton, the storm grew worse and we came to a halt. The conductor announced the signal system had gone down and we couldn’t move until it was fixed. I was safe inside the warm car, and I just didn’t care. After about 15 minutes, we started to move slowly, stop and go, stop and go.

We met a stream of northbound trains as we (and they) crept along. Suddenly, I noticed we were speeding up, and we went flying into Philadelphia and on south to Washington, where we were almost on time. It was raining in Washington, but just a little bit. I won’t forget that trip.