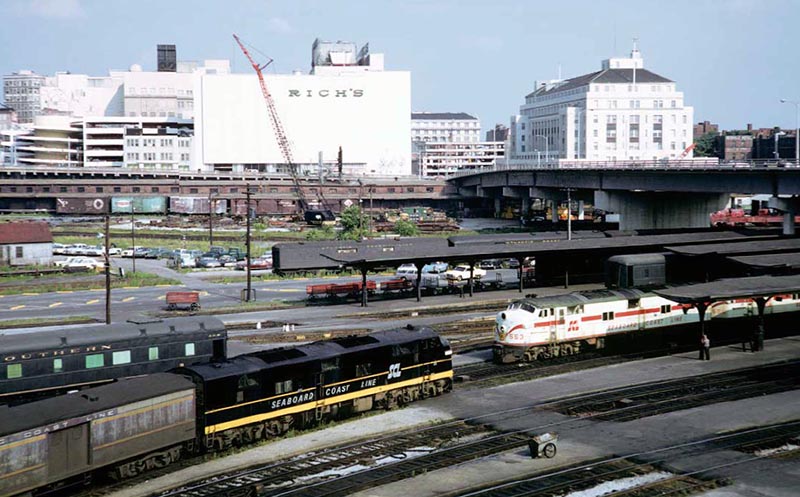 A view of Seabord Coast Line’s Atlanta Terminal Station looking northeasterly in June 1968. The train at left is SCL nameless local No. 15 from New York City and Washington, D.C., arriving somewhat late. The train at right is the northbound Silver Comet, having arrived from Birmingham via a reverse move from Howell Tower. Regardless of the Comet’s direction of travel, the normal routine was to have an SCL yard engine pull the train in backward from Howell Tower, locomotives and all. The train would depart back north under its own power. Richard Baldwin photo 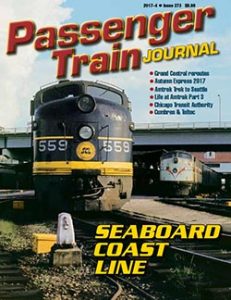 By W. Reid Adams/photos as noted

Seaboard Coast Line on Day 1: It was a quiet Friday evening—the last day of June 1967 —at the joint Seaboard Air Line/Atlantic Coast Line passenger station at Savannah, Ga. At midnight, the temperature outside was a balmy 78 degrees, with a slight breeze from the south. But this wasn’t just another day at the modern depot, whose blue neon sign greeted patrons with the names of the two north-south railroads; June 30th would be the last day of operations for both the Seaboard and the Coast Line.

Interestingly, the neon station sign adorning the modern station that was constructed jointly by the two railroads just five years earlier, proclaimed—prophetically if not intentionally— the name “Seaboard-Coast Line Passenger Station.” But at 12:01am on July 1, 1967, the only thing that would need changing was the hyphen, dropped from the name. During the next 24 hours on that Saturday, the 16 former ACL and SAL passenger trains would pass through this station for the first time as passenger trains of the Seaboard Coast Line Railroad Company.

The first three trains were scheduled to arrive that morning between 1:41 and 1:58 a.m. As train time approached, passengers gathered outside on the platform waiting on their trains to take them north to points north like Yemassee, Charleston, Florence, or south to Jacksonville and Miami. At 1:30am, the station agent announced that the “Coast Line” and the “Seaboard” were no longer separate railroads and that a new railroad had taken over: the Seaboard Coast Line. A few minutes later, the agent announced the arrival of the first SCL train, the southbound Everglades, train number 375. He got out his log book as he had been doing for many years and made a notation of the historical event, and then wrote down the consist of this 16-car train.

According to the Savannah station schedule, the first train through the station should have been the southbound Silver Star, train 21, arriving at 1:05 a.m. However, on this first day of the new SCL, the Silver Star was running 52 minutes late and thus became the second train through the station, arriving at 1:57 a.m. One minute later, on-time train 376, the northbound Everglades, pulled in alongside the Silver Star. The platform was now full of people rushing to board the two SCL trains or to greet de-training patrons. The station agent moved rapidly to mark down the consist of No. 21, because promptly at 2:02am the Star’s four E-units released the air brakes and wasted no time gathering speed with the 19- car streamliner, continuing south toward Jacksonville and then Miami. 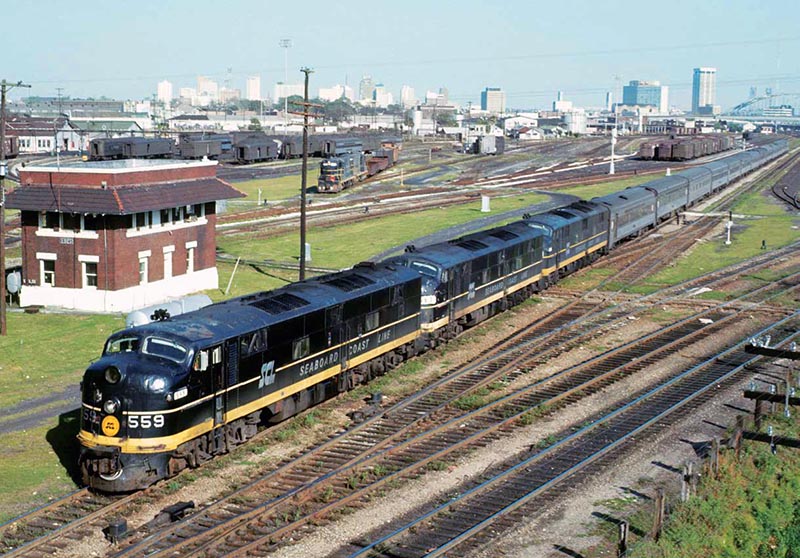 The remaining train at the station, the northbound Everglades, lingered for 16 more minutes, loading and unloading mail and express. At 2:18 a.m., No. 376 pulled north along track 2, heading north along the double-track ex-ACL main line toward Charleston, N.C., and, eventually, Richmond, Va., and Washington, D.C., where the train terminated. Now the station platforms were quiet once more. The agent walked back toward the station and looked at his record of the first few trains of the new SCL, noting that the Silver Star had a healthy consist.

After the departure of No. 376, the morning would bring six more trains through the station:

For the rest of the day, the northbound and southbound counterpart trains came through Savannah, closing the day with northbound No. 22, the Silver Star, at 11:20pm. In the waiting room of the Savannah station, new, bright orange SCL timetables were proudly displayed in the rack near the ticket window. Opening up the first page of the July 1, 1967, timetable, passengers saw the welcoming introduction from Chairman John Smith and President Thomas Rice, that a “New Railroad is here,” and that it would be one great railroad merged from two successful carriers.

For the next three and a half years, Seaboard Coast Line passenger operations continued the tradition of its predecessor railroads in providing excellent service, despite dark times in the industry during the late 1960s. Over the few short years since SCL’s creation, routes were consolidated and otherwise rationalized due the duplicative nature of the parallel systems. Secondary passenger trains were some of the first to be curtailed or eliminated, especially as the mail contracts were removed and express service transferred to air and trucks. However, SCL preserved its core streamliners, and the top-notch service they provided, up to the end. 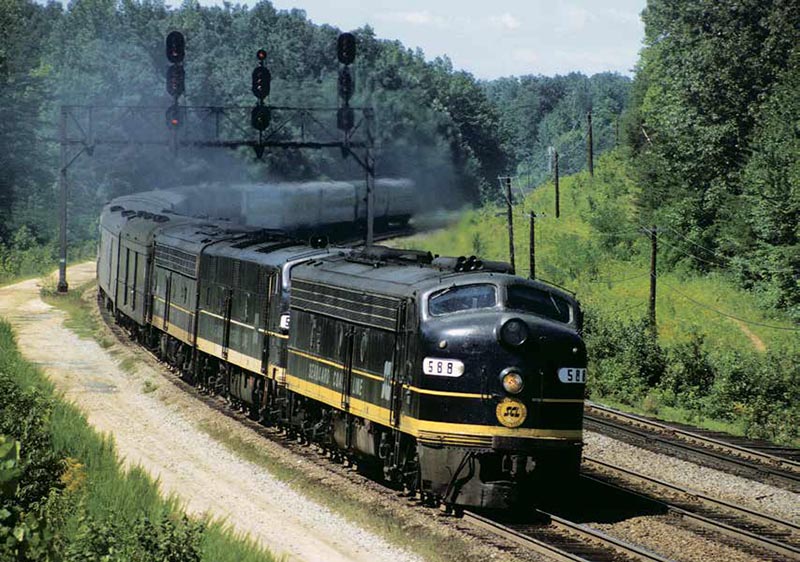 A trio of SCL E-units cruises through Franconia, Va., on the RF&P with the northbound Silver Star in August 1970. Dale Jacobson

A new railroad in troubled times

The 1960s were not good for U.S. passenger trains, as the airlines converted to jets, airports were modernized and expanded with the help of public funding, and the reach of the interstate highway system expanded with the completion of some principal transportation corridors. By this time, passenger trains had become the bane of existence for many railroad managers and executives who petitioned the Interstate Commerce Commission for train discontinuances at increasing numbers. Fueling the fire that would pretty much engulf the rail passenger industry, the U.S. Post Office ended nearly all contracts for mail handling aboard Railway Post Office cars— a staple of revenue for U.S. passenger trains—shifting to trucks and planes. This led to the death of many lightly patronized runs. The 1960s also saw an acceleration of “merger mania,” which would continue into the new millennium.

Although some mergers were well organized and considered a success—SCL being one of them—there was one debacle that had far-reaching effects on other railroads: the Feb. 1, 1968, merger of the Pennsylvania and New York Central railroads to form Penn Central. Penn Central’s mismanagement of its own affairs caused it to drastically cut costs and losses. This not only affected its own passenger operations, but also through-train operations with SCL and other carriers.

Despite all the doom and gloom, there remained a handful of progressive railroad companies that continued to solicit passenger business, with Seaboard Coast Line among those at the top of the list. The new SCL comprised two competing parallel railroads that were providing excellent passenger service and a variety of routes during a time when other railroads were eliminating trains, downgrading service, and turning away passengers. Both of these passenger-minded railroads had a long history of being proactive in soliciting passenger business to and from sunny Florida. Providing fast, quality passenger service had fostered a healthy competition between ACL and SAL, whose lines intermingled from Richmond, Va., all the way to Montgomery and Birmingham, Ala., and Tampa, Fla. Though parallel (versus end-to-end) mergers generally have proven to be counter-productive, SCL was ripe for rationalizing routes, trains, and facilities.

Seaboard Coast Line’s passenger service primarily revolved around long-haul trains between Florida and the New York and Chicago markets. SCL inherited a fleet of eight streamliners that it continued to operate in the same fashion on Day 1 with no changes. These trains included:

SCL also inherited eight secondary trains, serving similar markets as the streamliners but with emphasis on express and mail service. Many of these secondary trains provided daytime service at times opposite the streamliners, because most of the the latter trains’ timings were set up for convenient morning or mid-afternoon departures from the endpoint destinations.

Former Seaboard Air Line secondary trains included the Sunland (New York–Miami, jointly operated with the Pennsylvania Railroad/ Penn Central and Richmond, Fredericksburg & Potomac); the Palmland (New York–Miami/Tampa-St. Petersburg); and the Tidewater (Portsmouth–Jacksonville/ Atlanta). The latter was run as a separate train from Portsmouth to Raleigh, with through cars connecting to the Sunland for through service to Jacksonville and beyond to both coasts of Florida. The Tidewater also had through cars connecting at Raleigh to the Silver Comet for service into Atlanta and Birmingham.

There were two Midwest–Florida secondary trains: the Seminole between Chicago and Jacksonville via Illinois Central to Birmingham, Central of Georgia to Albany, Ga., and thence SCL to Jacksonville; and the remains of the erstwhile Chicago–Jacksonville Dixie Flyer. The Atlanta–Jacksonville segment was all that remained when SCL inherited the train. At Jacksonville, both of these trains connected with other trains to points south along both coasts of Florida.

All the trains mentioned were year-round, but just five months after the merger, on December 15, 1967, SCL continued an 80-year ACL tradition. Passengers were treated to the winter-only, seasonal streamliner Florida Special from mid-December through mid-April. It was unlike any other contemporary train in terms of equipment and operation. SCL operated the Florida Special with more sleepers than coaches, heavy on all-bedroom and compartment cars leased from Pullman. The train also contained two diners (one for the coach section and one for the sleepers), a sleeper-lounge, and a 5-bedroom lounge-observation car Royal Palm. Truly a unique train, the Florida Special was the pride of the SCL fleet. In their first SCL season, trains 1 and 2 made the trip from New York to Miami in 25 hours—an hour faster than the Silver Meteor. 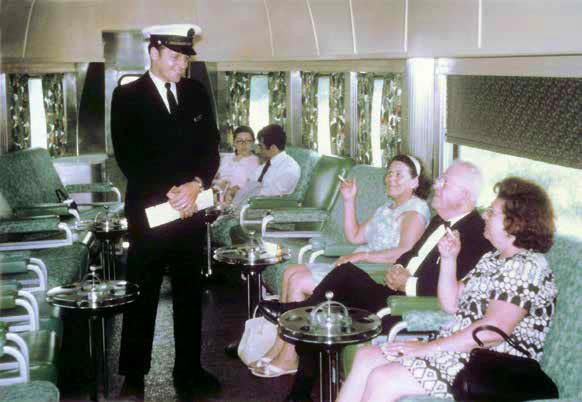 But, as SCL vice president for Passenger Operations J.R Getty stated, “It’s not the train equipment of the Special that makes it different from all other trains in the country: it’s the whole concept of fun that is prevalent throughout the entire journey. The train is like a long-distance cruise on wheels. There are hostesses, fashion shows, happy hours, complimentary champagne at dinner, and even a telephone for the businessman who can’t seem to leave work behind.”

The Special offered afternoon departures from New York, Philadelphia, and Washington, and then sped through the night with limited stops until daylight when it stopped at Wildwood, Fla., for servicing. The Special was aimed at the long-distance vacationer, and the long wait time for space illustrates the popularity of this SCL train above all others. Heavy advertising in the northern states helped make the Special extremely popular, and it continued to be so under SCL for the next three seasons in all its glory, despite the pressures from Penn Central to discontinue it.

At Jacksonville, the train split into the three separate trains: one to Miami, one to Tampa, and one to St. Petersburg. The Miami section continued as trains 1 and 2 along the original ACL route via Orlando and then onto the SAL at Auburndale to reach Miami. Following the West Coast Champion’s ex-ACL summer route via Orlando, the Tampa section operated as trains 91 and 92, with two split-off sections, one from Lakeland to Naples and the other from Tampa to Sarasota. The Jacksonville–St. Pete section, trains 191 and 192, followed the original ACL route via Gainesville and Ocala…