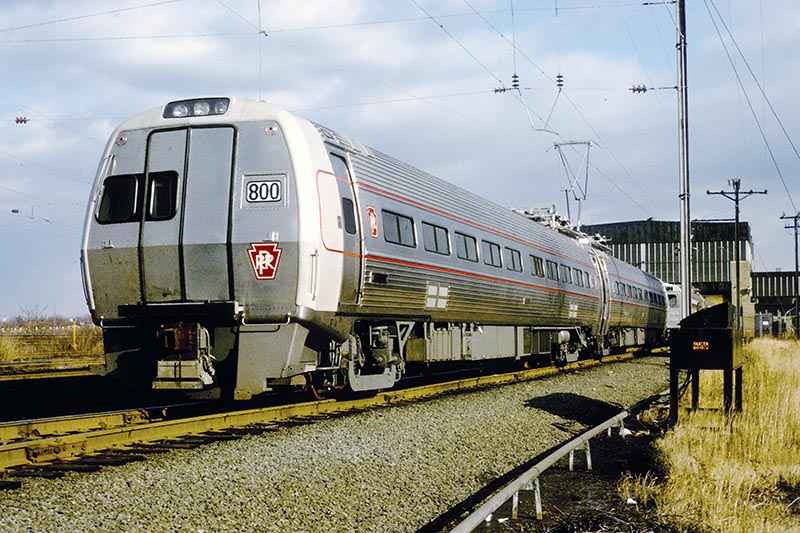 The first Metroliner cars Nos. 800 and 802 were delivered to Morrisville Yard on December 16, 1967, sporting traditional PRR keystone logos and red pinstripes even though the Penn Central merger would take place in less than two months. The new cars were not without their problems, and Metroliner would not enter revenue service for successor Penn Central until 1969. Bob Watson photo 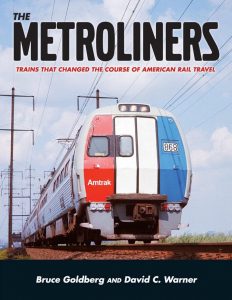 Compiled by PTJ Staff/Photos as noted

America’s fastest passenger trains were developed through an innovative high-speed rail program that spanned more than forty years. For two generations of rail travelers, “Metroliner” evoked an image of speed and convenience. Conceived when the future of U.S. rail travel was in doubt, Metroliner captured the public’s attention and arguably led Congress to create Amtrak.

The Metroliners tells the story of the development, marketing, and operational challenges, all of which led to the train becoming the most-used travel mode in the busy corridor between New York and Washington. Authored by industry insiders, The Metroliners follows the story from the turbulent 1960s to the development and introduction of Acela in the 21st century.

These sleek high-speed trains captured the imagination of the traveling public and created a brand that stood for a higher quality of service that set the industry standard for forty years. Enjoy these selected photos from the pages of The Metroliners, available now from White River Productions. 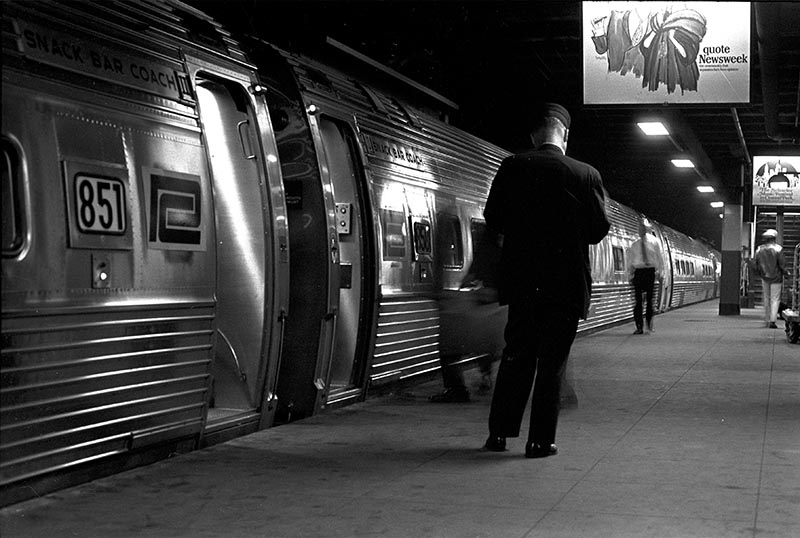 The conductor checks his watch as departure time approaches for Metroliner at New York Penn Station in August 1969. Keeping to the tight schedule was key to the new train’s success with corridor travelers. Martin K. O’toole photo 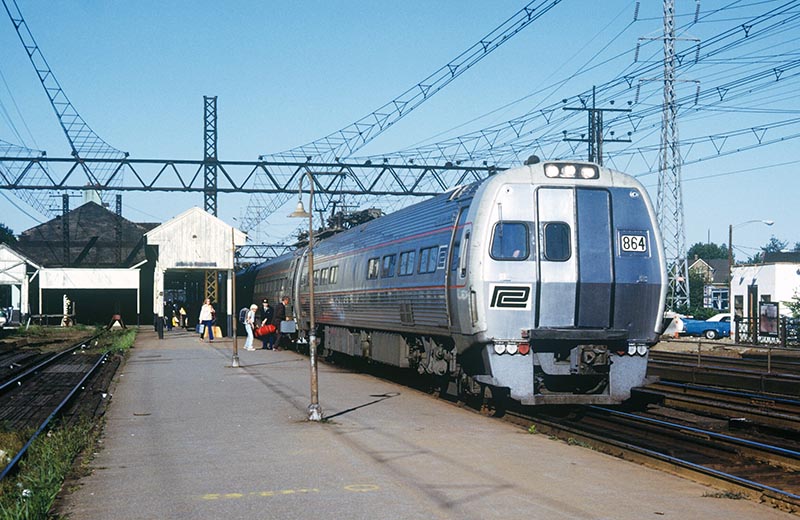 Despite wearing Penn Central decoration, this is an Amtrak Metroliner making a station stop at Stamford, Conn., in 1972. Amtrak’s extension of Metroliner service to New Haven in 1971 marked the first expansion beyond the New York-Washington market. All the stations between New York and Washington served by the Metroliner had high-level platforms; consequently vestibule steps were only installed at the B-end of the cars. East of New York, where the stations had low-level platforms, this contributed to significant boarding delays. Henry Frick photo 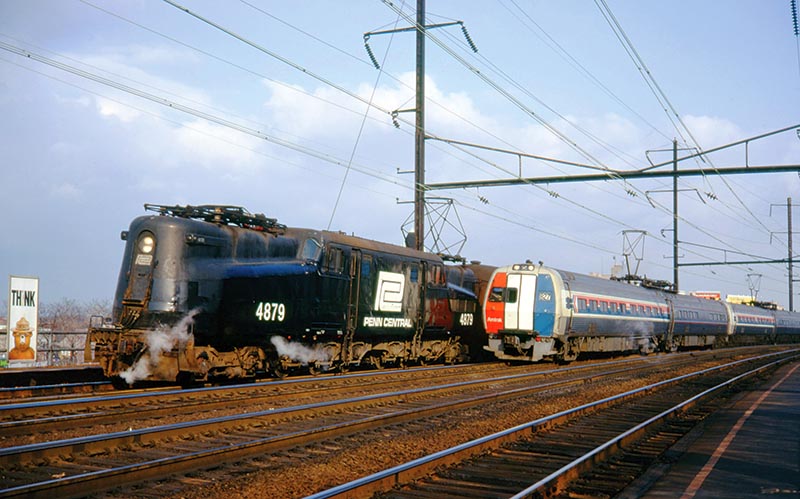 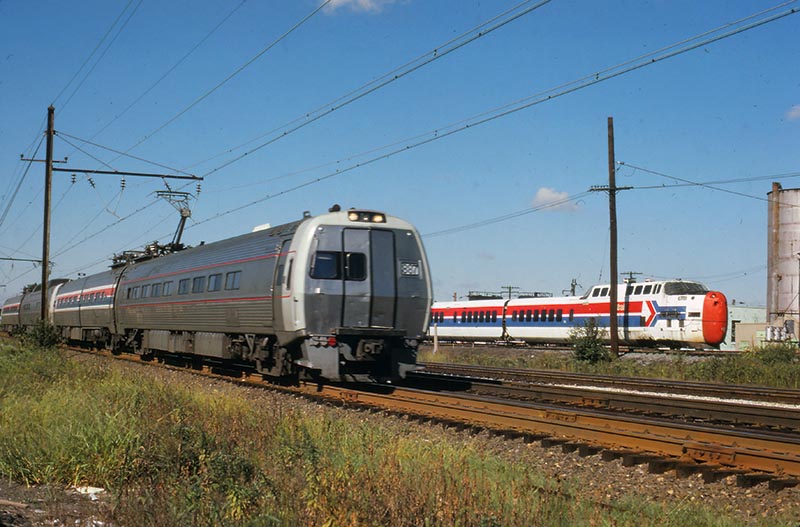 A northbound Metroliner passes Amtrak’s Ivy City maintenance facility in 1977. The third car is one of the two snack bar coaches on which prototype modifications were made.  Amtrak removed the UAC TurboTrain at right from service the previous year. Not all Metroliner cars received full Amtrak paint and markings due to complex lease and ownership issues surrounding the equipment. Jim Gerofsky photo 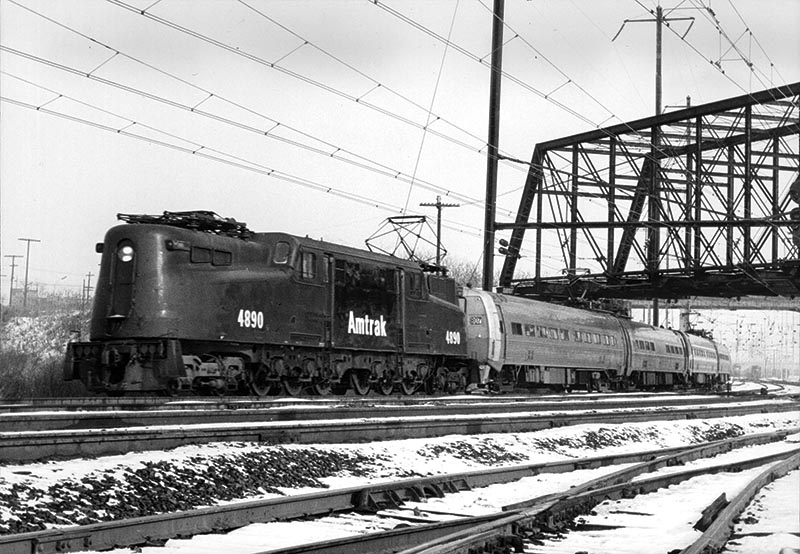 In a mix of old and new techology, an elderly GG-1 electric locomotive tows a train of Metroliners through the snow under the B&O bridge at the Bayview Yards, east of Baltimore, Md. Packed snow would interfere with the traction motors, but with pans raised for heat and lights, the Metroliner cars could still be used as coaches. Paul Alisea photo 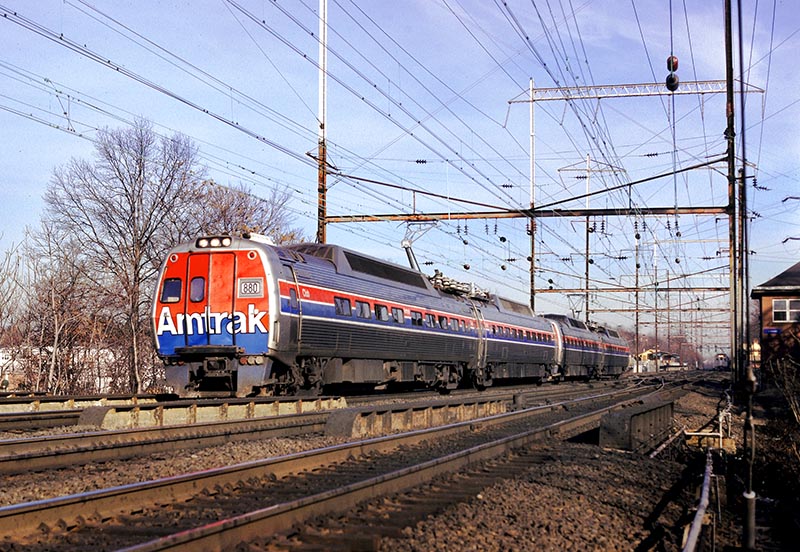 By the end of the 1970s, upgraded Metroliners were returning to service as part of a special program to move sensitive electrical equipment to the rooftop. Amtrak Club Car No. 880 leads a set of rebuilt Metroliners past Lincoln Tower in Metuchen, N.J. on January 1, 1980. The upgraded equipment was nice, but schedules were still falling behind due to the Northeast Corridor Improvement Project. Charles Freericks photo 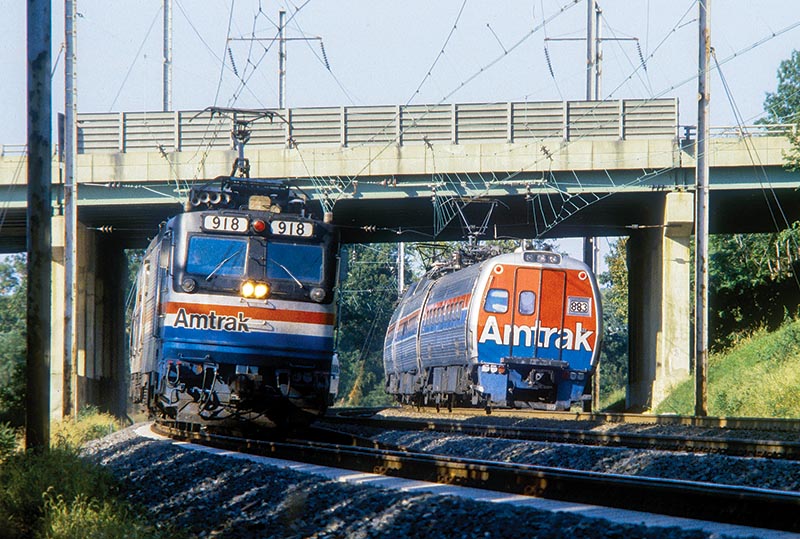 The changing of the guard was illustrated quite clearly at Arbutus, Md., as a southbound Amfleet train passes a northbound Metroliner set in July 1981. By the end of the year, the original Metroliner cars would be replaced by Amfleet trains on all Metroliner Service runs. Vincent Hammel, Jr. photo 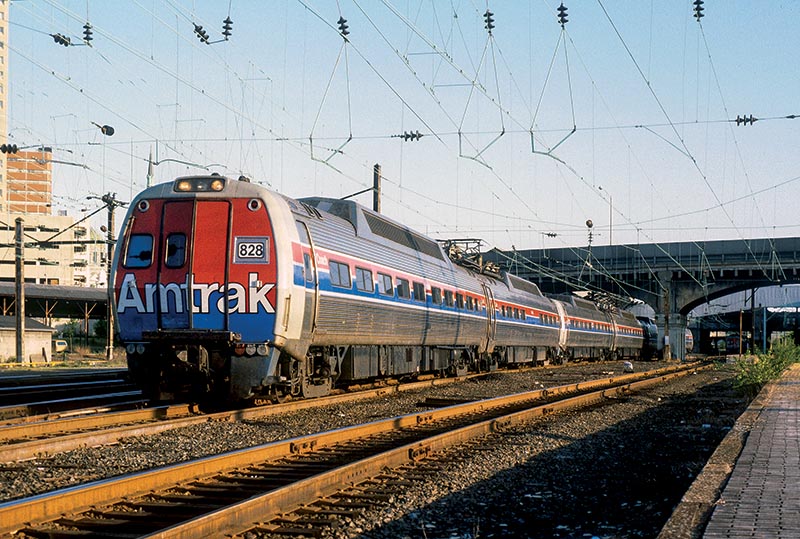 Withdrawn from the New York-Washington corridor in 1981, the original Metroliner fleet continued to provide service on the Keystone Corridor, as evidenced by this train arriving at Harrisburg on May 15, 1982. No longer would the original high-speed trains be the face of Metroliner service. Vincent Hammel, Jr. photo

Order your copy of The Metroliners
from White River Productions